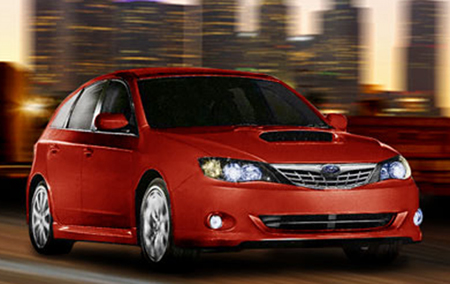 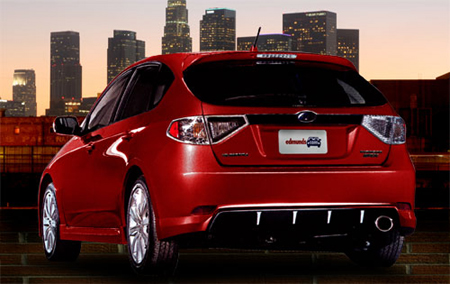 First of all, let’s get this out of the way, shall we?
Are the Motor Trend Pictures real, or just another lame photoshop attempt?

While the images may have been chopped a bit in post production to optimize contrast and color, the images are of the actual vehicle. Every manufacturer holds press events these days to introduce their cars exclusively to members of the press. The press may sometimes drive, shoot photos, inspect and even test the cars with the manufacturer’s permission. What we know right now, is that Subaru allowed the press to photograph the new car in a studio (to avoid the public eye) and gave them a healthy dollop of specs and marketing hype in the form of a press release. Magazines will all be reporting on basically the same information, including as much or as little of the press release material as they feel is necessary for their readership.. and most of them will have images of cars shot in the same studio. Expect them to be chopped onto different background images though… so that it looks like they actually got to drive it (this lends magazines more credibility in the reader’s eyes.. ironically enough). This is where „First Looks” come from in auto magazines everywhere. 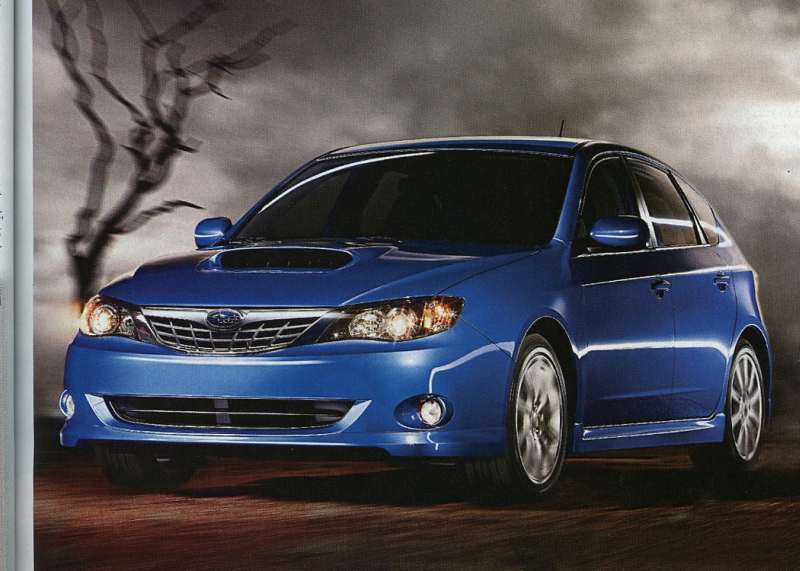 But, how can this happen? Isn’t there an embargo on this information before the debut at the New York Auto Show in 2 weeks?

Magazine publishers have a lot of pressure to get their rags out than they have time to worry about breaking embargoes by a few days. Motor Trend was sending out their May issue a month early (like most magazines these days) and apparently assumed that the other major rags would also be running the same story (..and there may be. Right now, we don’t know). One of the magazines reached the public much sooner than expected (publishing houses care even less about embargoes) and now we have images.. early.

How do we know this isn’t an elaborate April’s Fools joke from Motor Trend??

It being published in the May issue would be your first clue.

I’m not going to spend any more time discussing why these photos are the real thing. Anyone still doubting at this point will just have to wait for the NYAS (or for some other magazines’ May issues to hit the shelves)

Why did subaru build a hatchback? (or… Why Subaru dont dont hatchback??)

Subaru wanted to compete in the world market where hatchbacks are very popular. Even though the current Impreza is a compact by US standards, it’s a long, oversized vehicle to much of the rest of the world. Parking a hatchback on a city street is much easier, and most people never utilize the extra cargo volume of the wagon over a hatch anyway. Also, Subaru is one of the only remaining marques to campaign a sedan in the World Rally Championship. Longer cars are much harder to slide sideways down a narrow road.

In addition to that. Subaru realized that it had more wagon models than any other brand, and quickly put a halt to it. For 2007, the Legacy Wagon has been discontinued and for 2008, the Impreza hatch will replace the Impreza wagon. Subaru’s strategy is based on the belief that someone looking for an Impreza wagon will have the option between the smaller hatch and the larger Forester, and someone looking for a Legacy wagon will have the option of an Outback wagon or the Tribeca.

How is this any different than a wagon?

There is less rear overhang. The wheelbase is very similar to the previous impreza, but there’s less for Sir Mix-a-lot to like (ie: no big butts).

But what about the sedan? I want my sedan!

Worry not! Subaru is building a sedan for the US market. It will likely only be sold in North America. Expect base and WRX models to be available in sedan and hatch versions (much like the current sedans & wagons)

What about the STi? It will be a sedan, right?

I heard Subaru is going to build a 2 door hatch, where is it?

Sorry, there is no 2 door. 2 door 1995-2001 Imprezas were only sold as special editions outside of the US. Again, the tight city parking spaces make operating the larger doors necessary for a 2 door car, difficult at best. Since they didn’t sell well (even in the US, 2 door cars didn’t sell nearly as well as 4 doors and wagons), Subaru isn’t going to bother with them.

What is improved by going to the new platform?

The chassis is lighter and stiffer. The rear suspension is now more compact which means a wider & lower cargo area. This is made possible by the use of rear dual A-arms instead of the previous car’s rear Chapman Struts.

Why is the exhaust exiting on the right side? I thought the exhaust had to be on the opposite side of the car from the fuel filler door, for some reason?

The exhaust pipes are still on the left side of the driveshaft. The shortened rear overhang means that the muffler was turned 90 degrees and the tailpipe now exits on the other side. The exhaust is kept on the opposite side of the car from the evaporative emissions equipment that must be close to the fuel filler tube.

Why is the intake manifold plastic??

The important question is, „Why not?”. Modern plastics used for manifolds are extremely strong and much cheaper to produce than metal, are better at insulating heat, smoother on the inside (for better flow) and, best of all, lighter. Currently, aluminum prices are skyrocketting. Most carmakers, including Subaru, are reducing the amount of aluminum used to build their cars… the old intakes were made out of aluminum.

Why does the engine bay look like that of the Legacy?

But, what about the engine? Why the Legacy engine?

The Legacy engine was specifically designed to fit lower in the chassis, and the upper portion (radiator mounts, manifold, etc) were all made to meet the stringent European Pedestrian Impact standards. In other words: There must be enough crush space behind the hood to minimize the harm done to a struck pedestrian. If you’re crossing the street against traffic.. hope for a new Impreza to hit you, before an old one does.

Where are the fender flares?

The Impreza wagons never had fender flares before, so it shouldn’t be very surprising that the new hatch lacks them as well. Again, this is a world car.. a bread & butter vehicle for Subaru to sell to people all over the world. Not everybody loves fender flares on their car (I know, hard to believe!) The good news is that we can still expect the STI to come with some very aggressive flares. There have been a lot of very direct hints to this.

Why are the 4-pot brakes gone!

While the 4-pot brakes are nice, they don’t provide any more braking power than the 2-pots. The number of „pots” or pistons that a brake caliper has, only affects the feedback to the pedal. The 4-pots were added to the 2006 & 2007 WRX to add interest to an old chassis. This sort of de-contenting is perfectly normal for carmakers to do when introducing new vehicles. As the car ages, Subaru will add more features again to boost sales. For now, take solace in the fact that the mighty Honda/Acura NSX.. the only supercar designed with the help of Ayrton Senna and hailed as having the best brakes short of a Porsche 911, sported sliding calipers at all 4 corners. Besides, the 4 pots are actually heavier.

Subaru is owned by Toyota now, right? This new Impreza is actually a Corolla or something, right?

No, not at all. General Motors was holding onto a non-controlling share of Fuji Heavy Industries (Subaru’s parent company) up until this past Fall when they sold them. Some of them (8.7%) were sold to Toyota. Shortly afterwards, Toyota was looking at some major profits and several rumors began about them being in the position to buy Subaru entirely. Toyota quickly dismissed the rumors citing that they felt comfortable with their current involvement with Subaru, and were enjoying the collaborative efforts that were underway (sharing of the Indiana plant).

The new Impreza is 100% Subaru (if you don’t count the individual parts made by Nissan, Mitsubishi, KYB, Brembo, etc, etc, etc). It’s a Subaru design, through & through. 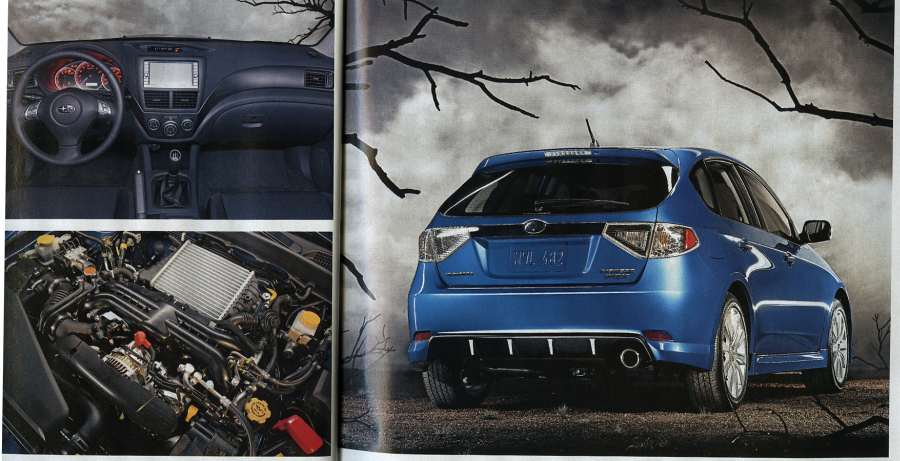 Why did Subaru make it so ugly?

I’m sorry. Subaru can not make you another GC8. Safety mandates and the fact that the 1990’s are over have forced Subaru to move on. Please try to do the same, or just buy a Subaru that you do like. They last a long time.

Well, then.. Why does it look like every other hatchback?

There aren’t too many different shapes that a hatchback can take… at least, not that are considered attractive (take a look at an AMC Gremlin or Pacer). The Subaru, while very similar to the Mazda 3, is lower, wider, has a longer hood

Why shouldn’t I buy an EVO X?

By all means, buy an EVO X! Nobody is stopping you or asking you not to. Just don’t throw a hissy fit here because you wanted an Impreza but can’t stomach your first glimpse at one. Anytime a new car comes out sporting a cutting-edge style, people find something to complain about. What do you think Henry Ford or Karl Benz would say if they were able to comment on the stylings of any of today’s modern cars? I’d find it hard to believe if they actually liked anything at first; even the cars that carry their names.

Try not to be angry. Anger is a natural emotion when confronting new things, but nothing to be ashamed of. View this new thing with an open mind.. and give it time before making yourself look silly by commenting in anger.